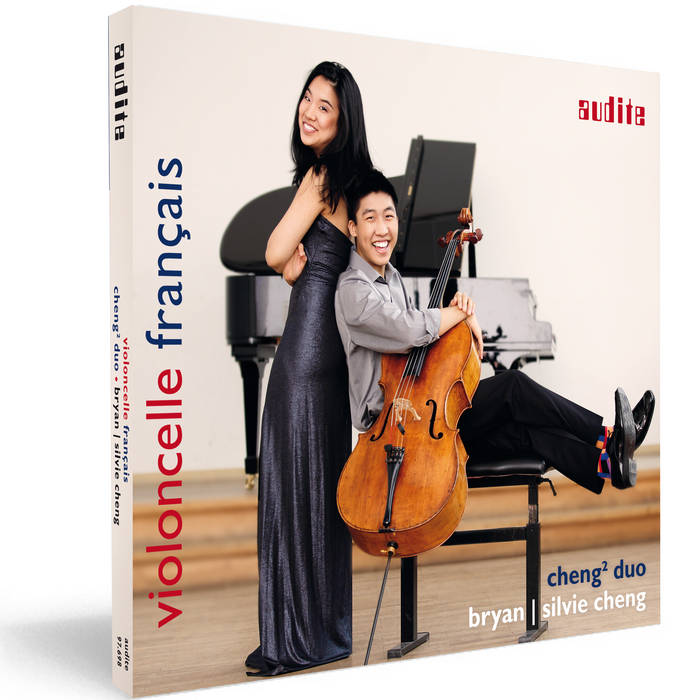 "Highly eloquent performances of a French program...especially a striking account of Debussy’s Sonata that shows the talent of the Canadian Cheng² Duo. With long heartfully rendered singing lines, Bryan Cheng gives us proof of the often-heard assertion that the cello sounds more like the human voice than any other instrument...one has the foremost impression that one has heard a very extraordinary cellist."

"'Violoncelle Français' begins with an introverted and poetic, extremely imaginative and personal interpretation of the cello sonata by Claude Debussy. Most interpreters don’t play Debussy’s feeling with such audacity as this duo does, and not so often does one truly hear the expression of this sonata's experimentality...the often surprising tempo changes and the jarring entries always sound beautiful and refined. The exceptional French quality which Debussy had in mind is very present."
—Pizzicato Magazine (Luxembourg)

“We are impressed! By the maturity and perfection of the cello-piano duo Cheng², the successful sound mixing of the two "incompatible" instruments, the musical sensitivity of the two musicians…we hear a carefully-weighed chamber music teamwork, which nevertheless does not shy away from extremes in terms of dynamics and expression. Both musicians seem to have grown beyond mere youthfulness, despite their youthful age…all these pieces are presented with so much taste, sure flair for phrasing, and beauty of sound, as we experience it here.”
—das Orchester (Germany)

"These are by any measure masterly performances - passionate, invigorating and wonderfully life-affirming…makes for very involving listening. The performance as a whole is tremendously ardent and virtuosic.”
—MusicWeb International

“Outstanding debut CD…Silvie Cheng’s hands glide from key to key, she weaves a sound carpet full of filigree patterns and spreads it out under the playing of her brother. Bryan Cheng storms up the scales sure-footedly, then prances triumphantly on the summit…he makes a dazzling appearance. One suspects that these two will be big successes.”
—Fono Forum (Germany)

“An impressive debut recording…What was quite clear, after multiple listenings, was that this is an interpretation of the Franck Sonata to live with, and to return to frequently. This one work alone would make the recording a worthwhile acquisition, and then there are such riches in the rest of the programme as well.”
—Large Stage Live! (Canada)

“All of the pieces are very happy classical hits, but performed with such feeling and enthusiasm and dedication. All of a sudden, all the melodies you may have heard a thousand times regain their innocence and beauty.”
—VPRO Vrije Geluiden (Netherlands)

“the selected melodies and sonatas are stylish and sensitive, played by a duo that has listened to each other in a good way”
—Rondo Magazin (Germany)

Named one of CBC Music’s 2015 “30 hot Canadian classical musicians under 30”, the Cheng² Duo (pronounced Cheng Squared Duo) now presents its debut album with German classical label audite. The brother-and-sister duo’s playing is steeped in a rare balance of unfiltered youthful joy and enthusiasm in their playing on one hand, and mature, historically informed, and profound interpretations on the other, commanding attention from the very first note.

This first disc makes the panorama of French chamber music for the cello and piano written between the 1860s and the 1910s come alive in all its diversity: from beloved sonatas whose composers mainly drew on the tradition of romantic composers, to modern impressionist works, to character pieces which formed part of the repertoire performed in sophisticated salons. Treasured compositions by Claude Debussy, César Franck, Gabriel Fauré, and Camille Saint-Saëns, and two additional bonus tracks (excerpts of French Baroque composer Louis Francœur’s Sonata in E Major in arrangements by Jean-Delphin Alard and Arnold Trowell) are featured.

A second recording of Spanish works for cello and piano will be released in June 2018.

Bandcamp Daily  your guide to the world of Bandcamp